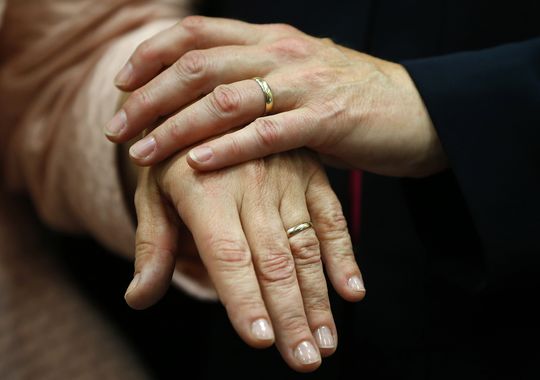 At the moment, she can’t have either wish. Her home state of Texas doesn’t consider her to be married or a mom. Her name isn’t even on the birth certificate.

Those two problems “never even crossed my mind” when she began looking for a lawyer to get out of her same-sex marriage, performed legally in Washington in 2010. “I didn’t think it would be this hard,” Flood Lesh, 33, says. “It’s a lot bigger than I initially thought.”

For lesbian and gay couples living in states where their marriages are not recognized, divorce is proving next to impossible. They married in places such as Iowa and Massachusetts, where same-sex marriage is legal. They live in places such as Indiana and Mississippi, where it’s not.

That leaves three choices when wedded bliss reaches an abyss: move to a state where same-sex marriage is legal, most of which have residency requirements for divorce; seek to have the marriage annulled; or begin what can be a protracted court battle.

Not wishing to uproot their lives or deny their pasts, most couples opt for the courtroom. Same-sex divorce cases have cropped up in more than a dozen states, mostly in the South and Midwest.

A few divorces have been granted — sometimes during brief periods after judges strike down same-sex marriage bans and before those rulings are stayed, such as occurred in Indiana late last month. A few judges have granted divorces because they oppose their state’s gay-marriage ban or do not consider it a roadblock.

For most couples, the experience of Allison Flood Lesh and Kristi Lesh is repeated. Even when a contentious matter such as child custody isn’t involved and the couples have settled all their issues, same-sex marriage bans stand in the way.

“There’s a connection that they would like to end that they are being forced to maintain,” says Florida attorney Ellen Ware, who represents Mariama Changamire Shaw in a collaborative divorce proceeding with no outstanding issues except one — the state doesn’t recognize the marriage.

Ware sees an irony in the Catch-22 situation. “If you are opposed to same-sex marriage, it seems like you should be in favor of at least allowing same-sex people who are married to get divorced,” she says.

NO MARRIAGE, NO DIVORCE

The dead end faced by some gays and lesbians seeking to divorce illustrates the type of problems facing same-sex couples despite the progress that followed last year’s Supreme Court ruling against the federal Defense of Marriage Act.

That 5-4 decision in United States v. Windsor forced the federal government to recognize states’ same-sex marriages for purposes of offering federal benefits. It didn’t force other states to legalize same-sex marriage or even recognize those performed elsewhere.

Same-sex couples find that it’s hard to get divorced if the judge doesn’t think you’re married. Most of the court cases that have cropped up involve lesbian couples, who are twice as likely to be married as gay men.

“The relationships have ripened enough so that they don’t like each other — just like a heterosexual couple,” says Lois Liberman, a matrimonial lawyer at Blank Rome.

If they don’t like each other in most of the 31 states without same-sex marriage, their options are limited. Annulment can be messy; it doesn’t settle issues such as property division and parental rights. Residency requirements range up to a year in some of the early gay-marriage states, such as Massachusetts, New York and Iowa.

Those residency rules apply only to divorce, not to marriage. They were enacted when divorces were harder to obtain, leading plaintiffs to “forum shop” for states with more lenient laws.

Couples stuck in an unhappy marriage face a range of problems. They may have to file state and federal taxes differently. They may need their spouse’s consent for major health and pension decisions. They lack enforceable court orders for dividing assets and debts, awarding alimony and handling child custody and parenting rights.

Not to mention their social lives, which can get stuck in neutral: Dating becomes cheating. A second marriage would be bigamy.

“One minute, I’m not allowed to get divorced in Texas. Next minute, I’m an adulterer,” Flood Lesh, an oil field engineer in San Antonio, quips. “I can’t win either way.”

At least one state, Wyoming, allows same-sex divorces even though it has not legalized same-sex marriages. Others, including California, Minnesota, Delaware, Vermont and the District of Columbia, allow couples who were married there to return for divorces without meeting residency requirements.

There are occasional success stories elsewhere, usually involving couples who just want to end their marriages — not change their states’ same-sex marriage laws.

“We have heard a number of people have successfully divorced,” says Cathy Sakimura, family law director at the National Center for Lesbian Rights. “They’re not seeking the rights and benefits of marriage.”

‘THIS IS ALL VERY NEW”

Often, a simple divorce filing morphs into a case carefully monitored by national gay rights groups for evidence of cracks in the same-sex marriage bans maintained by 31 states.

Such is Nichols v. Nichols, a Nebraska divorce case that challenges the state’s refusal to recognize out-of-state gay marriages. The state Supreme Court dismissed the case last month, citing a lack of jurisdiction to hear an appeal from a lower court.

Denial of divorce rights “binds a broken relationship together against the best interest of the state, the taxpayers, the individuals and their children,” says Megan Mikolajczyk, the lawyer for Bonnie Nichols.

In Texas, two couples married in Massachusetts nearly a decade ago met opposite fates — one was granted a divorce in Austin, the other was denied a divorce in Dallas. Those cases have since been joined on appeal.

In the Lesh case, state District Judge Barbara Nellermoe ruled in April that the state’s same-sex marriage ban is unconstitutional and the divorce proceeding can continue. Her ruling was blocked temporarily by an appeals court after state Attorney General Greg Abbott argued it could create “legal chaos.”

As she pursues the divorce, Flood Lesh is focused mostly on the little girl born through artificial insemination in Texas in February 2013, identified in court papers only as “K.A.F.L.” Kristi Lesh is fighting for full custody, and the Texas Family Code provides no protection for Flood Lesh because she wasn’t married in the eyes of the state when the girl was born. She hasn’t seen her daughter since November.

“There is somewhat of a bias toward a biological parent in a same-sex relationship,” says Marilyn Chinitz, a divorce law specialist at Blank Rome. “A lot of it is the perception of the court. This is all very new.”

To Flood Lesh, that doesn’t seem fair. “She’s here because of the both of us,” she says of her daughter. “She shouldn’t have to suffer because her parents can’t get along.”