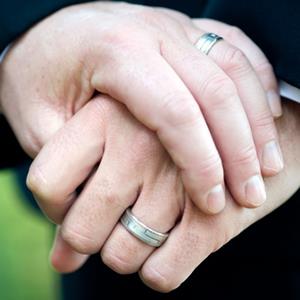 When Jason Dottley and his husband ended their marriage last year, neither bothered to hire a lawyer because the couple agreed they had nothing to fight over.

“Lawyers are what you get when things get difficult,” Dottley figured.

He had no idea just how difficult getting a same-sex divorce would be.

Dottley, an actor and singer, filed for divorce in April 2012 in California, where the court system was unfamiliar with how to handle his case. He eventually sought an attorney’s advice after growing frustrated with the numerous delays.

“The lawyer I hired really couldn’t offer much help,” he said. “His advice was basically, you can either keep plugging away or you can pay me to plug away, but until the courts figure out what they’re doing, I can’t speed this along for you any more than you can.”

It’s a story familiar to a growing number of same-sex couples, even as the gay community continues to celebrate the Supreme Court’s decision in June to strike down the Defense of Marriage Act. Many hope the ruling will encourage more states to legalize gay marriage, which is currently only legal in 13 states as well as the District of Columbia.

But because gay marriage is relatively new — Massachusetts became the first state to legalize it in 2004 — same-sex couples trying to get divorced have found their attempts come with high price tags and other expensive sacrifices in the few states even willing to grant them.

“Gay and lesbian couples have had to be pioneers,” said Susan Sommer, director of constitutional litigation for Lambda Legal, an advocacy group devoted to gay, lesbian, bisexual and transgender legal issues. “Until things get familiar, even in states like New York, where same-sex couples can marry, initially there will be a sense of, ‘How do we do this?’”

Time together: Reality vs. legality

Many same-sex couples were together for years, even decades, before they were allowed to marry. That can be an expensive problem in a divorce, as most courtrooms will only divide assets starting from the time a couple actually got married.

“A same-sex couple may have only been married for so many years, but that doesn’t mean they weren’t married in their hearts for much longer — and already co-mingled their assets or bought property together,” said Carolyn Satenberg, a New York-based family law attorney who has worked with many couples in this situation.

That’s what happened to Margaret Wenig. The New York-based rabbi got divorced earlier this year from a woman she married in 2008, and with whom she had registered as a domestic partner in 1996.

“But for the 17 years prior to our civil marriage, we lived as if we were married,” she said. “We raised children together, we merged our finances, we made each other the beneficiaries of our pensions and life insurance policies and in our wills.”

The two women were also executors and health care proxies for each other, and gave each other power of attorney. When they split, however, the court would only divide assets accumulated starting from when the couple married in 2008.

Our divorce has not only been an emotional and financial nightmare for us but for our adult children and members of our extended family as well,” Wenig said.

While the cost of divorce varies by city and state, Satenberg estimates that a traditional, heterosexual divorce in New York typically costs in the neighborhood of $10,000; Wenig said her divorce cost her over $120,000.

Last week, Minnesota and Rhode Island became the latest of only 13 states to legalize same-sex marriages. Because so few states recognize gay marriages, same-sex couples have often traveled some distance to make their unions official, and don’t live in the states where they got married.

Since divorce is usually granted to couples by the state where they live, states that do not recognize gay marriages typically won’t grant a divorce to a couple whose marriage they view as unlawful. That means individuals would have to return to the state where they got married to get a divorce, but that can be a financial and personal hardship, since many of these states have at least a 6-month minimum residency requirement for divorce applicants.

Sometimes, the decision over whether to grant divorce is also subjective.

Last year in Ohio, for example, where gay marriage was banned by constitutional amendment, a Columbus judge granted two men a divorce. Days later, another judge in the same court denied a divorce to a lesbian couple on the grounds of jurisdiction, pointing to the state’s ban on gay marriage.

Sommer said her organization has seen an uptick in requests from courtrooms across the country seeking additional briefs because they want to be sure they’re taking the right steps. But that extra work keeps the meter running for attorneys of couples trying to get divorced.

Satenberg estimates that same-sex couples usually pay twice as much for divorces as their heterosexual counterparts. Triple the price if children are involved.

“By default, either one or both of the parents are not the biological parent. And that brings in an entirely new set of legal problems if the couple hasn’t taken the appropriate steps to secure legal standing,” Satenberg said. “Some couples think, ‘Oh, we love each other. We’re going to stay together forever.’ They don’t really think, ‘I should adopt my son, I should adopt my daughter.’”

“Heterosexual marriage has been a part of our society for as long as we’ve been a country, and therefore our case law reflects those issues, and divorces and lawyers can navigate through a pretty well defined area of law,” Satenberg said.

“But when there are no clear answers, lawyers need to spend more time making motions. They need to craft legal arguments where none have previously existed because this is a new area of law.”

Dottley got married in California in October 2008 during the brief window when the state allowed gay couples to wed. But when he started to seek a divorce in 2012, he found himself tangled in paperwork immediately.

“They would repeatedly say, ‘Well, wait a minute. We have to create a whole new form to incorporate same-sex marriages into this dissolution process,” he said of his interaction with the legal system. “A good 50 percent of the delays were from the court not knowing how to handle things.”

Dottley says he watched as many heterosexual friends experienced a much smoother divorce process. “No else was going through what I did at the time,” he said.

Finding a lawyer familiar with the specialized practice of gay divorce can be expensive, so it helps to find someone sympathetic to the cause.

Ohio attorney Tom Addesa has successfully handled several same-sex divorces in Ohio, and charges a bargain $1,500 flat fee to handle uncontested same-sex divorce cases. He said a straight couple might pay about $5,000 if he were to charge his regular $250 hourly rate, but that a gay couple would pay far more because of additional documents he would need to prepare.

Gay couples are also more likely to have their divorce applications rejected, Addesa notes, which can lead to appeals, easily adding another $10,000 to the bill depending on how much work that entails.

“Those are layers of cost that straight couples never have to worry about,” Addesa said.

The stigma of starting over

Elizabeth Schwartz, a Miami attorney who works primarily with gay and lesbian families, said it’s time for the nation to start addressing divorce laws for same-sex couples. Otherwise, some people may start to disregard the law altogether.

“What some couples are doing, and it’s really frightening, is saying, ‘Well, I live in Florida, and marriage isn’t recognized here anyway, so what’s the difference? I’m just going to get married in this new relationship. The other one — who cares?’” she said. “Well, I’m sorry, that’s bigamy.”

She tells those individuals that if the relationship meant enough for them to get married in the first place, then it was real enough to get out — legally.

“I feel like I’m pissing on everybody’s marriage parade when I talk about divorce, but you can’t, as a pragmatic, family lawyer, avoid it,” she said. “Sometimes, a divorce is a beginning of a bright new chapter for people.”